I am the first to admit I’m addicted to technology. Living and working globally means I have to be available and online as much as I can. But that doesn’t mean I like it or that I feel it’s the best mode of learning. Call me old school but as much as I like google, give me a real live human being showing me how to do something and I’m happy as a pig in mud! And even better? Being in a group, sharing and learning…now that gives me the chills.

Sometimes I think of facebook like the pied piper of Hamelin. Do you remember that fairy tale? It was actually quite sinister. The villagers of Hamelin refused to pay the pied piper for making all the rats disappear so he played his flute and all the village children disappeared too. Spend long enough on facebook and we disappear. How many times have you vowed your going to go tech free, and you manage for a week or two or even a month and then slowly but surely your back on there claiming, ‘well my friend just had a baby and I wanted to see the photos.’

It’s the very addictive nature of social media that calls for a radical detox every now and then. In my humble opinion taking time out in nature to practice yoga and learn about its deeper meaning with others in a pristine environment is a welcome antidote. It’s hard to discern reality from fantasy in a virtual world, but real connection and true transmission is life altering and life enhancing. 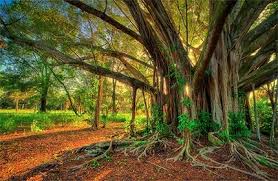 Way before we even had any kind of technology, we had the technology of sound, called pramana in the tradition; words articulated by the teacher as the means of knowledge. Handed down from teacher to student to share the total meaning of existence, these teachings were delivered under a Peepal tree. If you’ve every seen one, its stems and branches interlace, twist and expand with such majesty that it literally feels as though it’s alive.

In those days the only way you could learn was face to face. And you had to be the right sort of student. In a text called Tattva Bodha, the sage Shankacharya (who single handedly revived advaita vedanta in India at the age of 30)talks about the qualities required of a student.

You might think its something like humility, eagerness, a brilliant mind, the capacity to be open and enquiring. But these are modern concepts and ideals. 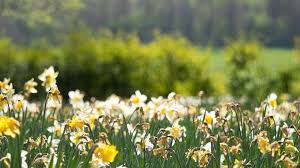 In the tradition the most important requirement is what’s called ‘a prepared mind.’ A prepared mind is like a plowed field ready for planting.  And how do we prepare our minds? The weeds need to be uprooted and the soil must be raked and tilled. If the ground is full of weeds the new plants will struggle to survive.

The yoga practices of asana, pranayama and meditation calm the mind and stop this ‘I’s  constant habit of needing to identify with every single little thought. We think the practices stop the thoughts, but that’s not the case. The thoughts don’t stop in meditation or any yoga practice.

Catching a break is like a sunburst in a cloud filled sky. When the sky opens up and the sun streams onto your face you feel light and warmth again. It’s the same feeling with a traditional way of learning. Rather than crowding your inbox with more and more newsletters promising the next best thing.

You go offline and come online to your SELF.

If you’d like to come online to yourself this summer join us on our first ever European Sadhu Camp June 30-July 3, 2016 in the southern black forest. Spaces are limited contact angela.blank@gmail.com for more details

5 thoughts on “Come online to your self”