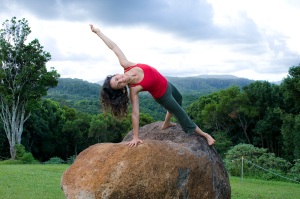 Recently I watched a short update on YouTube about a Yoga Conference in the States. They interviewed a popular Yoga teacher on her experience of the Conference. She was very positive about the power of coming together in community to share Yoga in large venues with a variety of Teachers. The whole idea of Yoga conferencing excites me too and I am so grateful to be sharing the Yoga of Lakshmi and a Yantra workshop at the upcoming Barcelona Yoga Conference on July 15 and 16th this year.

The one thing that stood out to me in the interview was how excited she felt about the merchandising aspect of Yoga. Stating that without Yoga products, well where would we be? Don’t get me wrong, I am all for Yoga products myself, I have produced Yoga videos and CD’s and wear Yoga labels and have practiced on an Eco friendly Yoga mat. But what she said made me think back to when I first started Yoga over twenty-six years ago. In those days when Iyengar, Astanga, Sivananda and Satyananda were the predominant styles in Australia, I made due with the roughest of materials and wouldn’t be caught dead wearing anything more then a tank top and a pair of baggy shorts. I had to go down to the car yard and order a roll of rubber and split the cost with my fellow yoga enthusiasts so I would  have a Yoga mat and then head to the carpenter to see if he could make me a block. I bought my blankets from an army/navy supply store with the hope that the shipment from China would make it that week and I can’t even remember where we got the straps, but I think someone bravely brought them over from the Iyengar school in India ( in those days going to India made you brave). If no supplies were handy you’d just roll out a towel and do Yoga on the floor or better yet on the grass. In fact I still do that.  It’s nice to feel the wood under my palms and feet or to squish my feet onto the earth.

So where would we be today without Yoga merchandise? Doing Yoga of course, because the core of Yoga practice is us, our bodies and the willingness to explore what and who we are!